Thoughts? I like this poster more... but the implication of Isaacs as the lead villain makes me sad as a Wesker fan. :c

Also, according to Ali Larter, the trailer will be premiering on IGN at noon PDT.

What it says on the tin. Milla has announced that she will be hosting a Facebook live chat on her Facebook page on the same day the trailer drops next week.

The trailer will be released some time on Tuesday, August 9th.

Per Milla's social media, where she posted the date in her Instagram bio.

"The new Resident Evil trailer is coming out August 9th everyone!!!"

The Resident Evil film-to-novel tradition continues. Pre-orders for a novelization of The Final Chapter are now open on Amazon. There's no cover at this point. The release date is set for after the film itself hits theaters, on January 31st.

The author is Tim Waggoner. He's written and has published more than thirty novels and short story collections, including original material, as well as tie-ins and novelizations; including tie-in work for television series “Supernatural."

The previous novel - for Retribution - was written by John Shirley.

And still none for Afterlife, bye. 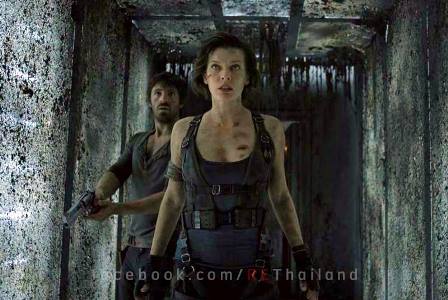 Screencaps from the trailer for The Final Chapter have appeared online. See them all below the cut, plus the one above bigger.

Does the plot, literally, thicken? Possibly.

In response to a question asked by one of his followers, Barry G - the gentleman from whom the photos and video in the previous post were taken from, a cameraman - said on his instagram that Wentworth Miller was on The Final Chapter set.

He also tagged Wentworth in several photos. One example is below.

Wentworth was notably left off of the cast list when it was announced, and he was, at one point, quoted as saying his schedule was too full to return.

So. Secretly filming? Just visiting? A joke? Flat out lies? Taking all bets.

What it says on the tin. Some bits and bobs that have been dug up on instagram. Beneath the cut for convenience.

Just found this killer pick from the RE set with the awesome @rubyrose taken by our sweetheart @iamfraserjames last year during production. That was a long, but amazing night! Trailer is coming soon I hear, I can't wait to see it!! #residentevil #finalchapter #ladiary